On March 1, Bulgarians traditionally wear martenitsas. But what is behind the symbolism of the two intertwined threads and why do they remain a characteristic feature of Bulgarian tradition? Find out some interesting beliefs related to the celebration.

Baba Marta was always angry and sour because her brothers Big Sechko (January) and Little Sechko (February) drank wine every year and left nothing for her. But when she saw martenitsas, she was amused and the sun immediately appeared.

As he travelled the distant Tibetan mountains, the khan mourned for his home and loved ones. He shared his pain with a swallow that landed on his shoulder. The bird flew away and told Kalina about her brother’s grief over the family, and the girl, in turn, sent green grass on the swallow, twisted with woollen fibre. When he saw the bird and the gift from his relatives, Asparuh was so happy that he adorned his chest with martenitsa and ordered his people on March 1 to tie a twisted white and red thread for health and success. 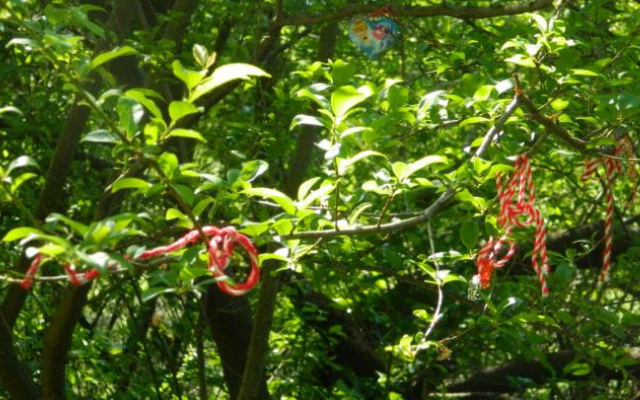 The Thracians always wore martenitsas during the spring mysteries, which marked the end of the cold and the awakening of nature to new life. Orpheus himself wrapped martenitsas around his lyre. For the Thracians, the intertwined red and white thread symbolizes the infinity of life and the immortality of the human spirit.

Such a tradition also exists in Romania (where the martenitsa is called “marcisor”), as well as in Moldova, Albania, northern Macedonia and some regions in Greece.

Ethnologists associate this custom with pagan cults of fertility, extremely widespread since ancient times on the Balkan Peninsula. In Greece, tradition dictates that woven woven thread be tied on the right arm and left leg.

The various names of the martenitsa in the different parts of Bulgaria are also interesting. In Blagoevgrad and Dobrich it is called simply “Marta”, in Central Northern Bulgaria – “gadalushka”, and in Northwestern Bulgaria it is often called “kititsa” or “martinka”.

The whole V-Gas team wishes you a happy March 1! Be healthy and loved!