In February this year, the European LPG Association (Liquid Gas Europe) published the document “BIOLPG. A RENEWABLE PATHWAY TOWARDS 2050 ”, which shows the prospects for propane-butane and bio propane-butane. It can be downloaded after registration from here. We publish the main highlights of the document.

The ambition of the European Union is to be climate neutral by 2050. The European LPG industry is committed to supporting this ambitious goal. The organization believes that the widespread use of LPG (propane-butane) and bioLPG (bio-propane butane), especially in rural areas and road transport, will help achieve this goal.

LPG cars reduce environmental pollution. They emit significantly less harmful emissions than diesel cars and gasoline cars in real
driving conditions. The same applies to heating and water heating, which is used by households that rely on LPG compared to those that use coal, heating oil, peat and others. 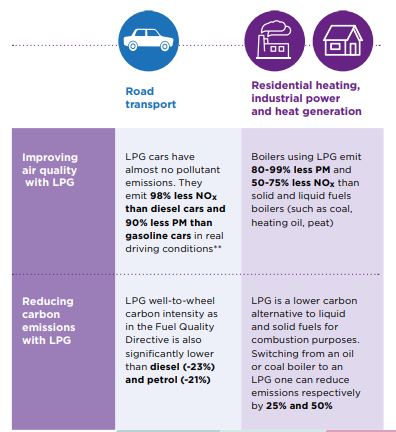 Today Autogas is the number one alternative fuel in the EU, counting 8 million vehicles and 35,000 fueling stations. Further, converting existing vehicles to Autogas is affordable for the consumer, and a costeffective solution to accelerate road transport emissions
reduction efforts from today’s car park. All these efforts are a perfect basis for the segment to increase the uptake of bioLPG.

It is the industry’s ambition to continue advancing both LPG and bioLPG uptake and production by:
• Advising consumers and businesses on the possibility and advantages of switching to LPG in the short-term and bioLPG in the future
• Educating stakeholders and policymakers about bioLPG and its potential
• Approaching investors on possible projects producing bioLPG
• Considering investing in the production of bioLPG
• Joining consortia applying for EU funding of research projects
• Sponsoring industry-funded PhD, collaborating with research labs or offering research grants to look into new technology pathways for bioLPG